Hi Guys, I write before you a year older and...well probably not much wiser. Turning 28 (scarily close to thirty - which I will not take very well when it occurs lol) attributes some of my absence this week from blogging, yesterday for example, though the day after my birthday I spent nearly all my spare time constructing this birthday present: 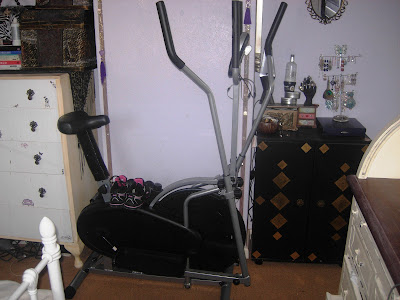 This beast, which is a cross trainer and bike is to fit in an already tight bedroom, but alas there is nowhere else for it to go so I'm looking to make all rooms in the house as ergonomic and multi-functional as the art studio; which is not only the smallest space in the house but it also holds the largest amount & is the most used lol. (Btw don't think me getting this means I'm a healthy person, I'm defiantly not lol but since leaving London I am in need of fitting daily exercise back into my life, as I just don't do the same amount that used to come naturally dashing up escalators or running to catch trains). So due to it's size we've decided to called it Grawp, as it's a giant, after Hagrid's little brother from Harry Potter - we decided it couldn't be called Hagrid as it wasn't furry...

& we couldn't call it Madam Maxime as my full sized mannequin jewellery holder got that name a decade ago....long before it was popular to drape your jewellery on things for decoration, I used to go out looking for interesting objects because I like to add drapes & dangles to real life as much as I do to journals :)

Anyway I just wanted to catch up as I haven't done anything much arty things this week except for a few pages in my smash book: 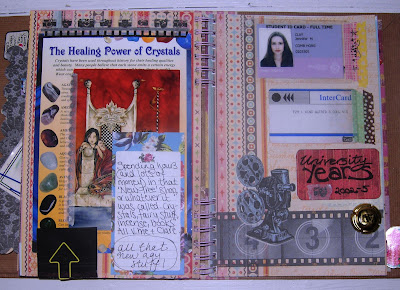 And a video on my homemade smash kit as was requested by subscribers after my last smash book video:
One thing that did make me smile today is my original recycled cereal box journal tutorial today reached over 5,000 views on yt, now I know to some that might not seem so grand but to me it's just *awesome*. Even this week I've still seen new blog posts & videos showing versions of handmade journals people have created using this tutorial and it just makes me really, really happy. So go cereal box journals, go! Whoop! If you have no idea what I'm talking about here is the original tutorial, much love and kisses, Jennibellie xx

Posted by Jennibellie at 17:55